I’ve been super excited for the release of the Vive ever since I saw this video of artist Alex Briskham creating 3D art with the Vive: https://www.youtube.com/watch?v=EYY-DZ14i9E. As an artist and architect, I am interested in how VR technology will play a role in the representation of 3D spaces. Currently, most architecture firms utilize renders, plans, and sections to convey both interior and exteriors of buildings. In undergrad, I would try to create animations and “walkthroughs” of 3D models I created. This is all well and good, but imagine literally walking in 3D digital representation of the space! VR allows users to really experience a space as they would in real life. That’s incredible.

My brother decided to purchase a Vive and was kind enough to lend it to my boyfriend Sasha and I for a few hours. We hooked it up to my rig (the Vive headset screen runs at a cool 90Hz refresh rate and a resolution of 3024×1680 and therefore needs some serious computing power) and set up the motion tracking cameras which detect the sensors in both the headset and controllers. When I first put it on, I was completely baffled at how realistic it felt. The visuals, along with the completely accurate controllers, really helped sell it as virtual reality. My favorite part was sitting atop Vesper mountain and playing with a robot dog whereas Sasha really enjoyed playing as an archer in the game Bowslinger (when you release the arrow, the controllers quiver as a bow would- crazy stuff).

Anyways, I thought I would share some images of mine and Sasha’s first experience with the Vive. Check ’em out! 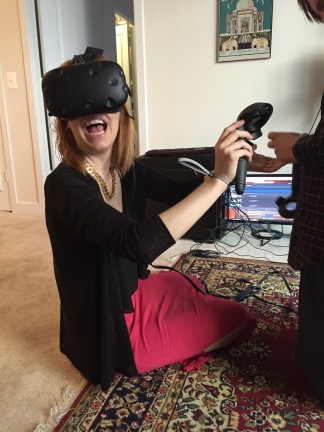 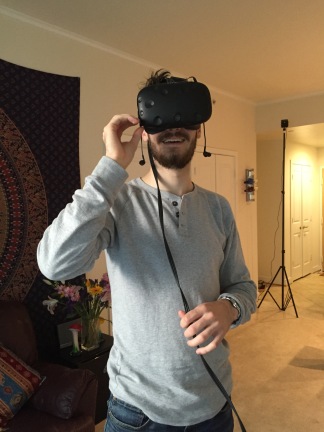 View all posts by ican3dprintthat