I apologize for the delayed post, for as you know, I have been quite busy with my new Prusa printer. It has been a bit of a rocky road to start, but I’m still really excited for what this printer has in store for me and all the great things I’ll print in the future! So I’m going to give a step-by-step of my first few weeks with it- hopefully this will give insight to other users on some common issues.

So here we go, the unboxing:

This of course was so so exciting for me! I’ve loved 3D printing since college and always dreamed of having my own printer to meddle with. I decided to purchase the Prusa i3 MK2S assembled and received the printer quite quickly (I know Prusa Research just expanded their labs and therefore have faster turnaround time on their orders). Once I received the printer, I unboxed and began following the initial calibration tests. Check out these gummy bears hanging out with my newly unboxed printer:

So here is where my issues begin. First issue was, as some of you may have guessed.. an extruder clog. To those of you who have never used a 3D printer, an extruder clog is one of the most common issues with 3D printers. A clog is never a quick or easy problem to resolve. I first noticed the clog when trying to load the filament for the very first time. I was quite frustrated, as I hadn’t even printed anything, but this ultimately became a very vital learning experience for me and I’m glad I had to go through it.

I tried both the the cold pull method and heat creep method (meaning I heated my nozzle to over about 230 Celsius to loosen any stuck PLA filament). Unfortunately, this did not remove the filament clog. Prusa provides an acupuncture needle you can insert into the nozzle to try and remove any stuck filament. Here you can see I ended up bending mine by pushing too hard on it:

And here is how far I got my filament into the nozzle (you can see I’ve already begun taking apart the extruder… you’ll hear more about that loose fan in a moment):

I decided to resort to both Google and Prusa customer service, since at this point I had no idea how to remove the clog. I found this article, whose author had a very similar clog to mine- he ended up taking apart his extruder. I was hesitant to do so, as I had purchased my printer assembled and had no background in the mechanics of the printer. However, Prusa customer service got back to me and said the same thing; I would have to take apart the extruder to clear the clog. They provided video instructions on how to disassemble the extruder, which helped me greatly and, yes, led to me removing the clog. Here are the links to those videos (1 and 2) if anyone else runs into a similar clog with their Prusa MK2S printer or E3D V6 hotend.

Firstly, it was really just unscrewing the motor, two fans, and housing, without damaging any of the wiring.

After this is where it became more difficult. Essentially, after removing the housing, you are left with your nozzle (the tiny piece where your filament comes out), hot end (the box-like piece where all your wires connect and heat up- thus the name), and the heat break and heat sink (the pieces through which your filament travels to the hotend- there is typically also teflon tubing to help the filament flow correctly). See the below image as to what this all looks like: 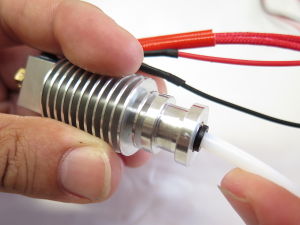 And looked what popped out- that’s right, the clog! Sorry for potato quality, I was shaking from excitement:

So there you have it, how to remove a clog from your extruder. This, of course, was not the end of my troubles as I had to reassemble everything. As soon as I began to reassemble, I realized that the wires from the cooling fan had broken off. I took this photo with just the black wire broken off, but as soon as I moved the fan, the red wire fell off as well:

*SIGH* Out comes the soldering iron:

Thankfully, soldering the wires worked and the fan powered up as I booted up the printer. And we are back in business!

Everything calibrated fine and I was able to begin printing.

So exciting! Unfortunately, I do have to end the post with another issue… between the prints in the photo and now, my Z and Y axis became misaligned. The nozzle is hitting the bed every time I try to calibrate, and the PINDA is not aligned correctly (you can see it’s shifted forward, a bit outside of the white dashed circle):

I’m hoping to get this fixed relatively quickly, and am cautiously optimistic due to my victory over the Battle of the Clog. WISH ME LUCK!

A big shout out to the customer service over at Prusa Research and to my boyfriend, who put up with my cursing and helped me unscrew the hotend/solder the fan!

View all posts by ican3dprintthat

One thought on “Regarding my Prusa i3 MK2S”